Esteemed veterans of the Chicago music scene David Bloom and Cliff Colnot team up to produce Contender, a vivid and eclectic celebration of their 20-year collaboration

Album boasts the cream of the crop among Chicago jazz artists, including graduates of David Bloom’s venerable jazz school

Chicago, IL — The education scene is filled with teachers who have a good lesson plan. For more than 40 years, the award-winning educator David Bloom has had a great lesson plan, predicated on the “big picture” of artistic creation – the need to have a cogent and coherent overview, even before knowing the scales and chords. On Contender (Fire And Form Records), he presents ten original compositions that exemplify what he teaches.

One of those lessons concerns the fact that for all its vaunted individualism, jazz remains a cooperative venture. So while the compositions are his own, Bloom has joined forces with the brilliant arranger (and his former student) Cliff Colnot, whose vibrant interpretations give each of these pieces a life beyond the page. Along with contributions from a coterie of Chicago’s jazz elite, and guest spots from internationally renowned drummer Victor Lewis, they combine to paint a sonic mural that stretches across the myriad styles and genres that have influenced their work.

The album ranges from the sassy, brassy swing of “Coulda Been A Contenda” to the rich tapestry of “Presumptuous Assumption,” where nearly a dozen violas gird and frame the saxophone solos. On Bloom’s pulsating “Some Are Groovin’,” the soloists reside in uniquely burnished surroundings formed by trumpet, trombone, cello, and electric bass; at the other end of the sonic spectrum is the translucent chorale of flute, bass clarinet, and flugelhorn that introduces “I Never Knew You.” For “Will Or Won’t,” Colnot combines double-reeds, tenor saxophone, and the exquisite expressivity of vocalist Cheryl Wilson to enhance Bloom’s already haunting melody; he doubles down on this tonal palette by bringing in bassoon and French horn to embrace the lovely ballad “First Smile.” 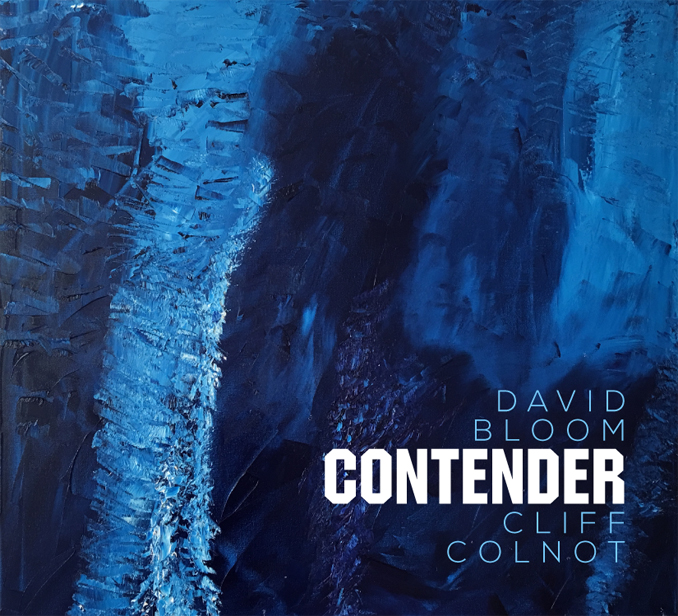 As NEA Jazz Master saxophonist Dave Liebman states in the liner booklet, “This recording is a great example of synchronicity between composer and arranger.”

Contender also reflects several of the tenets that Bloom has imparted to young artists in the 43 years since he founded the Bloom School of Jazz in Chicago: the wisdom of varying tempos from piece to piece; the efficacy of varying the order of the soloists; and of course, the value of arranging each composition – in terms of instrumentation, voicings, interludes, and counter-lines – to get the most out of it. “I particularly enjoyed writing this music, giving Cliff a few ideas about instrumentation, and then coming to the studio and hearing his glorious rendering of my compositions,” Bloom states.

In addition, the prime soloists – saxophonists Mark Colby and Mike Smith, trumpeter Rob Parton, pianist Jeremy Kahn, and vocalist Wilson (in a series of wordless improvisations) – exemplify the wisdom contained in Bloom’s “Ten Commandments of Jazz Soloing.” Although crafted for his students, this decalogue can serve professionals as well, with such directives as “Thou shalt tell a story” (each solo should have a narrative arc); “Thou shalt play with the rest of the band” (jazz should be a cooperative venture rather than a series of diva turns); and “Thou shalt use silence with the same commitment as playing sounds,” encapsulating a lesson epitomized by artists from Bix Beiderbecke and Lester Young to Miles Davis and Jason Moran. Bloom himself prefers to lead from the written page and engineering console, but he takes a rare solo turn on guitar in his homage to Wes Montgomery, “I Remember Wes.”

In the end, however, Contender does not focus specifically on the individual contributions of its ace improvisers, or on Bloom’s varied and attractive compositions, or on Colnot’s ingenious use of all the colors at his disposal. This album instead reveals the sterling interplay of all these elements: the never-overlong solos rise and fall from within the gorgeous arrangements, which themselves speak to the harmonious interchange between composer and arranger. And if these performances pass along larger lessons about music and art, so be it.

A veteran of the jazz scene and a respected presence in Chicago music, composer-producer DAVID BLOOM began classical clarinet studies at the age of 9 in his native Chicago before gravitating to folk music on guitar and flute; at 19, galvanized by Buddy Guy’s performance at the University of Chicago Blues Festival, he approached the blues legend and subsequently became Guy’s first student. Bloom then attended Boston’s Berklee College of Music for two years before returning to Chicago and founding the Bloom School of Jazz in 1975 (at the age of 21).

Since then he has taught literally thousands of musicians, a legacy that in 2017 earned him the prestigious “Jazz Educator of the Year” award from the Jazz Institute of Chicago. But his expertise doesn’t stop at jazz. Bloom’s unique approach to education applies to musicians of every stripe, from folk to rock to jazz to world music, and his list of alumni teems with artists who have gone on to success in all these disciplines. Among them: award-winning violinist Zach Brock; critically acclaimed avant-garde trumpeter Rob Mazurek; continent-spanning harpist Isabelle Olivier; dancer Mark Yonally, founder-director of Chicago Tap Theatre; and pianist-composer Ryan Cohan (recipient of a Guggenheim fellowship and several Chamber Music America grants).

Bloom has authored eight instructional books, but his expertise extends beyond the classroom as well. Admired for his discerning ear and his wealth of experience, he has produced and advised on multiple projects, from musicians’ demo recordings to video and film productions, and currently spearheads the creation of the documentary What Is Soul?, examining that question through the words of the legendary Studs Terkel, author and radio host Rick Kogan, actress Natalia Nogulich, dozens of other interviewees from high-school students to jurists and doctors to newsman Bill Kurtis.

In the 40th-anniversary documentary Cool Heat [WTTW-TV], built around a reunion concert that brought together dozens of Bloom’s former students, the 13-time GRAMMY-winning bassist and producer Steve Rodby commented, “Only Bloom could pull this off; only Bloom would dream it up. . . . It’s also a chance for a lot of musicians to contribute to give something back to him.”

CLIFF COLNOT’s career spans the realms of jazz, orchestral music, and the booming commercial recording studios that proliferated in Chicago during the 1980s and 90s. Originally a bassoonist, he is one of a handful of musicians to have studied repertoire with former Chicago Symphony conductor Daniel Barenboim, and he worked closely with globetrotting conductor Pierre Boulez, one of the 20th century’s most important composers. Colnot’s interest in new music led him to conduct such ensembles as the Chicago Symphony’s MusicNOW ensemble and the International Contemporary Ensemble (ICE), while at the same time leading the Civic Orchestra of Chicago – the training grounds for the Chicago Symphony – from 1994 through 2016.

Colnot has also excelled in the little-known art of arranging classical music, tailoring pieces originally composed for small ensemble to the demands and opportunities of the full orchestra; such orchestrations include works by 21st-century composer Shulamit Ran, 20th-century giants Schoenberg and Messiaen, and Mahler – as well as Duke Ellington. Colnot’s unimpeded command of multiple idioms served him well as a composer and producer of commercial music – where he first worked with some of the artists on Contender – and has made him an in-demand collaborator with artists from jazz pianist-chanteuse Patricia Barber to country star Leann Rimes. He employs all elements from all these genres on Contender, enhancing the broad sweep of his writing with details drawn from rock, folk, jazz, and classical music.

Listen to the Sampler

Quotes About the Latest Album Contender

“The ten compositions, paired with Cliff’s deep understanding of instrumentation, provide an impressive variety of moods, grooves, colors and directions to explore and enjoy.

“This recording is a great example of synchronicity between composer and arranger….you know there were a lot of smiles in the studio during the sessions!!”

for information on licensing music.